Rosie Cook (English 2007) worked in the City before her desire for a new swim costume saw her set up her own company, Deakin & Blue.

What was your first experience of Fitzwilliam and what are your recollections?

I was pooled to Fitz; I’d applied to a central town college, a more traditional, Cambridge college. My first experience was coming in for an interview, usually a pretty intimidating experience filled with nerves. But actually I remember really vividly feeling very relaxed for that whole day. I had two or three different interviews. I met a current student at the time and then had an interview. It was winter, but I remember being really struck by the gardens and The Grove and the architecture of Fitz. Going in for a second round of interviews you could feel so fraught, but it felt so much more relaxed and friendly and welcoming. That probably set the stage for me. It meant I performed relatively well and got an offer, but it framed my experience of Fitz all the way through. Not relaxed academically, but friendly and accessible and not stuffy, not taking itself too seriously. That was such an important part of Fitz’s identity for me and it meant it was such a lovely college to be a part of.

Did that atmosphere help you to thrive academically?

Definitely. All of us achieve and perform at our best when we feel relaxed and can be the best version of ourselves. It created an environment I really wanted to contribute to, a community I wanted to belong to and build further upon. I was actively involved in College life: I sang in various groups - the chapel choir, the Fitz Sirens, I rowed in the College boat, I was active in the JCR. Rather than feeling like it was a college I was a member of, I felt I actually had an ownership and responsibility for the College and wanted to give back. That was so formative and really shaped me throughout my time there but also since leaving as well. 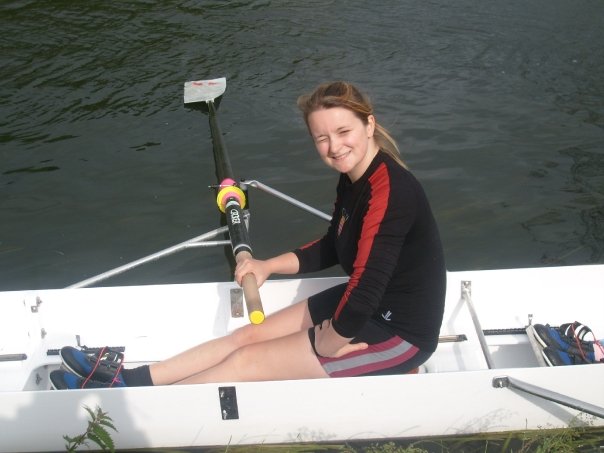 How did you move from reading English to founding a swimwear company?

I studied English because I love reading and books and storytelling and stories, the use of language to form our thinking and ideas, everything from history to relationships in humans and so on. There has been this other part of me which was more business and commercially orientated, which probably came out in the JCR role, wanting to rally people together and get things done. I did an internship when I was in my second year at Fitz and then had a job lined up when I finished. There wasn’t an obvious career for me at the time; I didn’t feel incredibly strongly that I wanted to do one thing in particular. The idea of going into the City, getting quite a broad range of experience, building up commercial skills – something I felt I lacked having studied quite an academic, non-commercial degree for three years –  felt like such a great opportunity. I had enjoyed the internship and really liked the people I’d worked with. And in strategy consulting there is a creativity to it, in thinking in quite a blue sky way. I absolutely loved it. However, as a strategy consultant you do a lot of advising and recommending, but you’re not doing a lot of doing. So it really appealed to go and work for a much smaller organisation and get some first-hand experience running a business and being directly connected to the consumers or the people that benefited from the services and products that you sold. So I went and joined a start-up as their head of operations. It was tiny compared to Deloitte, and that really whet my appetite for entrepreneurship, running my own business, making an impact and solving a problem. Then, three years ago, I started swimming for exercise and couldn’t find a swimsuit for my weekly swim. It sparked this whole journey of discovery around swimwear and the body image issues women have when they want to go for a swim. Hundreds of thousands of women aren’t swimming because of a lack of kit. And one in two mums aren’t taking their child to learn to swim. When I found those facts out I felt really galvanised by this and decided to take a leap of faith. Deakin and Blue was born out of that. It wasn’t a linear path after graduating but there were steps along the way that made sense as it happened.

Has swimming always been a passion for you?

I’ve always been a water baby but I didn’t swim competitively as a child. I really only rediscovered my love for swimming about three years ago. And now I swim once a week without fail and more if I can. I love the mental break, as much as the physical side. It’s not something I’ve always done and I think that put me in such a unique position. If you’ve always swum then a typical sports swimsuit might work fine for you and your physique – or you might not have the impetus to question the kit and whether it works for you. However, because I’m a regular sized woman (rather than an athlete) with curves and someone who was coming anew to swimming, a Speedo simply didn’t work for me, so that prompted the whole process of discovery. The problem we’re trying to solve is helping women – whatever their shape or size – feel good in a swimsuit. And, more than that, if you want to move in your swimsuit, whether that’s running round the pool after your kids, or surfing, or going for a weekly swim, we provide kit that is designed for that. For me the real personal passion is about solving the problem for women. If there was another problem to be solved which fell within that passion, I think you could apply the same skills to that. And longer term with Deakin and Blue we’re thinking about ath-leisure, sportswear more generally, other problem areas. Swimming becomes the starting point.

Do you have any particular role models?

I have various individuals that I admire for things they achieve. Someone like Sara Blakely (the Spanx founder) is a great example, because she has a business similar to mine. And she’s very hands on. Helena Morrissey, the Fitz alumna (1984, philosophy), incredibly impressive career in the City, nine children, has been a leading voice on everything from politics to finance. Whilst I may not have aspirations to have nine children, the message she sends to women like me that you can have both a career and family is really amazing. Any women that are advocates for body brilliance and body positivity, whatever your shape or size, they definitely would fall into my camp, for sure. Also, the founder of (outdoor clothing company) Patagonia, Yvon Chouinard, he’s a fantastic example of someone who has built a billion dollar business but actually is pushing for a circular economy. They donate a huge portion of their profits for social and economic causes and in everything they do they are trying to make the world a better place while also running an incredibly successful business.

Any advice for your younger self?

There’s a part of me that would say: ‘Don’t go to Cindies as much, make sure you go to a few more politics lectures, or harness all of those extra things and make sure you make the most of it’. And I look back a lot and think ‘did I make the most of it?’ But actually I think I would say: ‘Do everything you did, but try to worry a bit less about what it’s all for, where it’s all going. Worry less about what people might think and your own expectations and just do - as I did, but do more of - spend time with your brilliant friends and trust your instincts’.