Jo's journey from Fitz to The Bank of England

Jo Place (Economics 1980) is the Chief Operating Officer at The Bank of England. She discusses her path from Fitzwilliam, via a brief career as a maths teacher, to The Bank.

How did you decide upon Fitzwilliam and what were your first impressions?

I went to a state school that couldn’t provide teaching support for the Oxbridge entrance exam, so I simply looked through the prospectus for colleges that took A-Level applications. At the time there were only two colleges that encouraged A-Level applications. So it was already down to two, one was Emma, one was Fitz. My sister had gone through the same process the year before and chosen Emma, so I chose Fitz. So, although I chose Fitzwilliam, it sort of chose me because it was the only option for me really. Offering A-Levels said to me ‘inclusive’ – and that was certainly my first impression of Fitz. There were state and private school students there, international students. In the college environment, people know everybody, you don’t just stick to your course or your year.

And why I chose economics. Well, actually, the truth is I was always going to do a maths degree. I did double maths and economics at A-Level and during sixth form I found I just really enjoyed economics. I liked the applied economics, and that it was like real life. I just got really interested in that at A-Level and that’s what I chose to do at degree level.

What was it like being in the second intake of women at Fitz?

To be honest at the time it felt completely normal. I was actually, coincidentally, the second year of women at my school. So I enjoyed setting some stuff up rather than just inheriting something that was already there, for example, helping set up the netball team – and I was a founder member of the Shallots. I can remember debating what we should call ourselves and whether we should link it to the name of the Onions or should we not link it to the Onions. 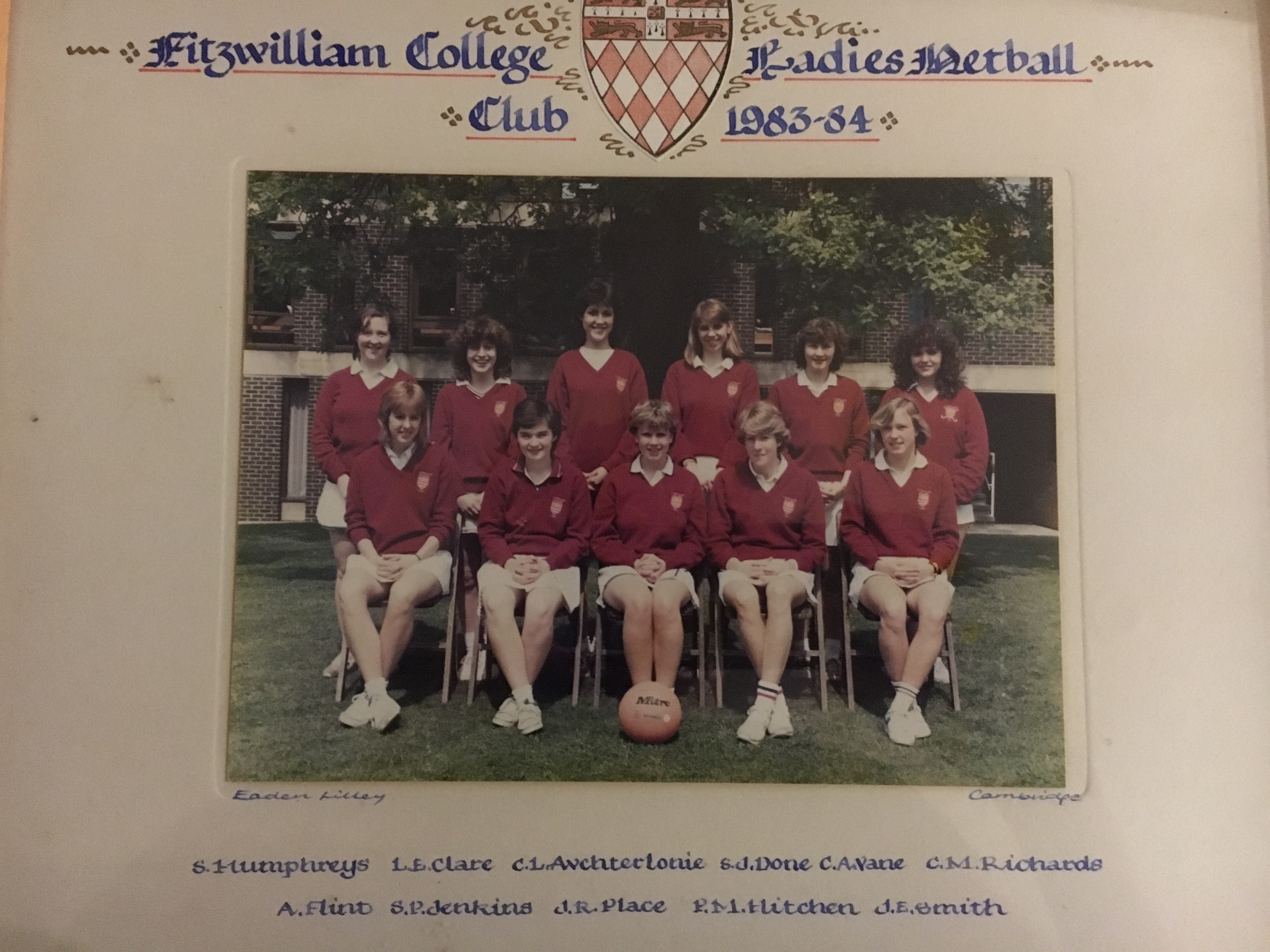 And what were my fellow women at Fitz like? Well, terrific. I still keep in touch with a number of them today, as you’d expect. And I think because of the inclusivity of the College, it wasn’t as if the males and females were separate for any reason, it was just very mixed in and very inclusive.

What did you do when you left Fitz? Did you go straight to The Bank of England?

I did a PGCE in maths and PE. Still based at Fitz as my college but linked to Homerton in terms of teaching. I taught maths for two years - that was my first career. The reason I left teaching wasn’t because I didn’t like it - in fact I loved teaching - but I thought, ‘I’m not sure I want to do this forever’. So I explored the world of finance, because I had a maths background and economics. Anyway it was ‘big bang’- the late 80s - and I just thought The Bank of England looked interesting because there were lots of different careers under the same roof.

The Bank is interesting because it’s public sector, but it’s also a unique institution - there’s only one central bank - so it felt quite special. I went on the graduate programme, along with about 50 other graduates. I really didn’t have any grand plans for how long to stay, I just thought I would stay as long as the work’s interesting and I’m challenged and I’m developing. I’ve moved around The Bank and worked in almost every department and found it interesting and challenging etc. Over 30 years later I’m still here and one of the Deputy Governors.

The Bank when I joined was very much a male dominated institution, but that wasn’t unusual for many companies at that time. My graduate intake (at The Bank) was mostly men, but there were quite a lot of women as well – and that’s changing all the time. The Bank is also much less hierarchical and bureaucratic than when I joined, though of course there are parts that are still quite traditional.

Increasing diversity is part of your role at The Bank of England – please can you tell us more?

Over the last 10 years there’s been a lot of work on diversity. There are a number of protected characteristics and we have targets on gender and ethnicity. We have a number of staff networks, eg our BAME network, LGBT, disability, faith networks, women, parents’ network, carers’ network, etc. You belong quite quickly because there are all these networks that you can belong to. The important thing is, anybody can join the networks, you don’t have to be gay to be a member of the LGBT, you don’t have to be a woman to be part of the women’s network. The networks are a combination of support groups, social clubs, lobby groups etc – and work closely with HR. They also put on a lot of events, so that helps integration quite a lot.

Flexible working has made a massive difference to diversity in terms of people being able to work and have children, or work and care for elderly parents or work and have some serious hobbies. We’ve also introduced things like sponsorship, mentoring, and pooled recruitment for our senior positions. On the latter, we group our vacancies so we think more about what do we want across the team, not just the individual recruitment. More recently we have begun to think seriously about wider inclusion - diversity is great, but it’s not much good having a diverse workforce if people don’t feel they belong and that they can bring their best self to work.

We’ve done a lot of work on our inclusion strategy, and recently, for example, we’ve done a cognitive diversity survey which is trying to get deeper into how people feel. On true inclusion it’s not just about gender and ethnicity, or indeed just the protected characteristics. It’s how people think and feel, along with their experience and their views. That is the way we will make better policy, by having a range of views and experience. We are serving the public, so we need to better reflect the public we serve in terms of our workforce.

What advice would you give to your younger self, knowing what you know now?

Have confidence and go for things, always. I’d also say that over the years, I’ve realised being organised makes life much simpler. So in that context what I’d say to my younger self is that you can fit everything in if you’re organised: just make sure whether it’s studies, or sport, or work, or family or caring, use your time effectively. Perhaps the biggest challenge for students! And what do I say to my children? That you get satisfaction from what you achieve rather than what you’re given. They roll their eyes at Mum’s advice but I hope some of it permeates.