Maggi (Theology and Religious Studies 1993) tells us about her varied career, which included being a mature undergraduate student at Fitzwilliam.

Maggi Dawn has had an unconventional route to become Professor of Theology and Principal of St Mary’s College, Durham.

Maggi (Theology and Religious Studies 1993) had been a successful musician before she matriculated at Fitzwilliam College for her undergraduate degree.

She recorded five albums and wrote hymns and music for religious television and radio, before an academic career which began at Fitzwilliam, included spells at Selwyn, King’s and Robinson Colleges in Cambridge, eight years at Yale University, and her current post in Durham.

“It was a bit of a convoluted journey – most of my career has been a series of leaps, some of which I didn’t see coming,” she tells fitz.cam.ac.uk.

“I had a marvellous time in the music business and I was successful in songwriting. I was commissioned over and over again to write hymns for religious TV and radio. I found myself exploring theological ideas and I wanted to know more. That led me down the path to studying it in depth.

“I was incredibly lucky to go to Fitzwilliam. Fitz had a set of theology Fellows at the time who were just brilliant, including Graham Davies, who was just an incredibly skilled director of studies. He didn’t just take the usual suspects. He spotted things in people.

“I was really nervous about going to Cambridge, thinking ‘what if I can’t keep up?’ As it turned out, I was perfectly able to do my degree, but Fitz made it possible.

“After I graduated, Graham said to me: ‘When I met you, you were a pop singer, and I just had this hunch that you thought in the right way, explored ideas and that you could be a really good theologian. The fact you’d come a different route to getting here was secondary.’”

Maggi was a Leathersellers’ scholar and played in the Fitz Swing band, and made the most of her experience.

She adds: “The tutor groups and subject groups would gather and we were often together to have tea, or go for pre-dinner drinks. We talked theology a lot. They were 10 years younger than me, but I made great friends.

“After lectures we’d go to a nearby tea shop, Belinda’s. We had a Fitz lecturer called Markus Bockmuehl, who used to teach on New Testament. Often he’d come with us and we’d ask him more over a cup of tea. He was brilliant. He’d always spend the extra time helping us.”

She continued expanding her horizons – even more so when Yale called.

“It was a lovely experience at Cambridge, and when you’re that ensconced you think ‘why would I ever leave?’” she adds.

“Then I got a call from Yale University. They were looking for somebody with quirky skill sets and off I went and I had eight wonderful years there.

“I was asked to sort out a vibrant and exciting Chapel, but it wasn’t very unified. It needed somebody to bring it together. That was not an easy task, but it was really interesting and good fun.

“In the process, I taught. And my experience teaching is, when you teach, most of the time you learn as much as your students. It doesn’t matter how much you know or how long you’ve been doing it, the students still make you think – and I don’t always know the answer.

“For my PhD I studied the poet Coleridge. He had this great saying: ‘Never be afraid to doubt, as long as you’re doing it in order to find the truth’.

“It was a Fitz teacher who said to me one time, the longer I live, the more I believe there’s only two or three things you need to believe in. Everything else is up for debate. I like that. It’s very freeing.

“Theology’s so much fun, because you can ask any question you like, there’s always another question to ask and it’s always an adventure.” 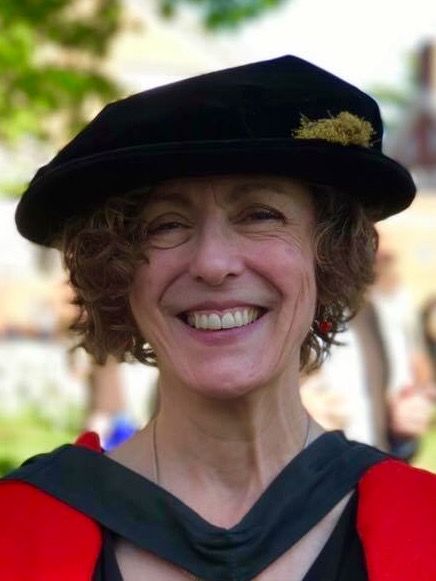 Maggi did not anticipate a return to the UK, but the desired professorship did not materialise in the United States and Durham, another collegiate university, had the ideal position.

“My grandparents are from the North East, so I felt a bit of a connection,” she adds.

“I’m having a lot of fun getting to know Durham from the inside and it’s got this incredible cathedral. Bill Bryson says it is the most beautiful cathedral in the world – and I’m beginning to agree with him.

“I’ve had a soft landing, because for the last five years I’ve had a visiting Fellowship at St John’s College, Durham. That makes it easier, because I’ve already got a few friends here.

“I’ve found myself in a warm-hearted, well-functioning College, and my job is to give it a bit of an MOT.”

The history of St Mary’s College as a women’s college, established to widen participation, reminded Maggi of Fitzwilliam.

“The determination Mary’s has to make anybody welcome means there’s a parallel to Fitz, which I rather like,” she adds.