Fitzwilliam has a history unlike that of any other Cambridge college.

Fitzwilliam was founded in 1869 by the Non-Collegiate Students Board to provide access to a Cambridge education for students who otherwise were unable to afford College fees. This was crucial, as membership of colleges was expensive – many students even had to buy their own furniture! The cost of being a non-collegiate student at Cambridge was less than half that of being a member of a college. Almost 150 years later, that founding ethos still remains at the heart of the College.

The first eight non-collegiate students were admitted in 1869. At least six were mature students, including two schoolmasters and a surgeon. At that time, and for the next century, the students lived in lodgings with landladies. The building known as Fitzwilliam Hall was purchased in 1887; situated on Trumpington Street opposite the Fitzwilliam Museum, it was where they socialised and received some teaching. The name Fitzwilliam House was adopted in 1924.

Student numbers grew, with a post-WWI peak of over 300 recorded in 1920. In 1944, it was decided that a new and larger building was needed, and by 1960 land had been purchased by the University and an architect – the celebrated modernist Sir Denys Lasdun – appointed. Fitzwilliam House moved to its current site in 1963, and in 1966 it was granted a Royal Charter and became Fitzwilliam College.

Today, Fitzwilliam is among the largest of the Cambridge colleges, with a community of around 450 undergraduates, 350 graduates, 55 Fellows and 120 staff.

In 2019 we marked 150 years of Fitzwilliam’s unique history with a series of events, including our Access and Widening Participation Conference in September. You can read the full story of the College’s history in Fitzwilliam: The First 150 Years of a Cambridge College. 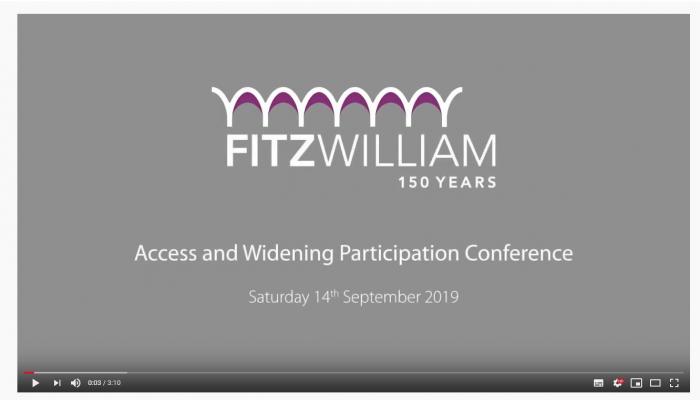 Video highlights from Saturday 14 September, 2019, at the culmination of our 150th anniversary celebrations.