Interview with the Master

Baroness Sally Morgan officially became Fitzwilliam College’s ninth Master on 1 October. Yet from her first connections with Fitzwilliam she felt an affinity which has only grown since the announcement in February that she would succeed Professor Nicola Padfield QC (Hon) as Master.

Fitzwilliam’s founding ethos, of access for all academically able students regardless of background, chimes with Sally, who has long worked with charities seeking to improve opportunities for those from disadvantaged backgrounds.

“I’ve always seen education as the best way that one can widen the life chances of young people,” she says.

“It’s long been a personal interest of mine and I believe that we have to commit to try to really improve and extend education throughout life.”

Born in Liverpool in June 1959, Sally was educated in the city. A childhood exploring the Lake District, North Wales and the Yorkshire Dales inspired a passion for geography.

She is perhaps best known for being a member of Prime Minister Tony Blair’s inner circle in the Labour Government elected in 1997. She was also head of Ofsted and served on the Olympic Delivery Authority board for the London 2012 Olympic and Paralympic Games.

One constant throughout her personal and professional life has been her links to education.

Her mother was a teacher and her son is a teacher. After graduating from the University of Durham with a geography degree, she was a secondary school teacher herself in the early 1980s before stepping up her involvement in the Labour Party.

“I loved geography and I think I always wanted to be a teacher,” adds Sally, who is married to barrister John Lyons, whom she met while at Durham. They have been married for 35 years and have two sons.

“I loved teaching. I didn’t leave because I didn’t like it. I left teaching for a change. I always thought I’d go back to it. I did a Masters in Education, because I was sure at some point I would be back in that sector. In a way I have been and now I am again.

“I am looking forward to being part of the academic community at the University of Cambridge, with a whole range of people who have got such energy and talent.” 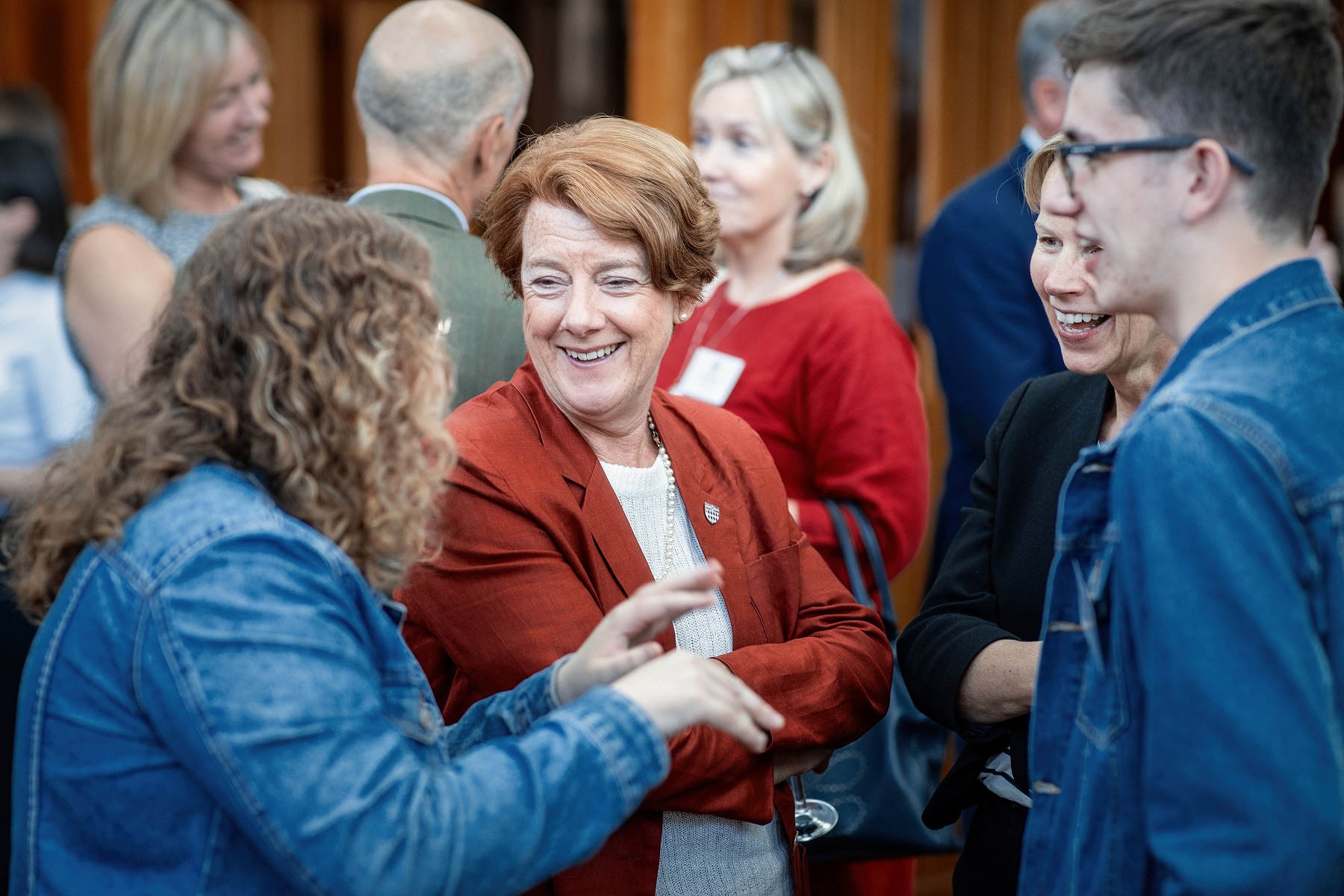 Fitzwilliam is now set to benefit from her experiences to date and she immediately felt comfortable in the College.

“Right from the beginning, walking through the gardens at Fitz, I felt a connection,” she says.

“It feels a natural home for me. I am a keen gardener and was immediately struck by the variety of the gardens. To have wildflowers, an allotment and a habitat to encourage hedgehogs says something about the psyche of the place – the informality, inclusivity and the sustainable approach.”

The discussion on access has grown in recent years, with attention rightly focused on Cambridge and Oxford, and more broadly on all elite universities to widen participation.

Sally is aware of the intricacies from a secondary education perspective, including through her involvement with the charities Ark and Ambition Initiative (formerly Future Leaders), and in higher education as Vice-Chair at Kings College, London.

She adds: “I’ve been on the other side, spending 14 years working with schools serving disadvantaged communities, trying to get kids into great universities and raising their aspirations to let them have a real crack at things.

“To come here and say ‘Fitz is a place that’s really trying to do that’, its overall ambition is to get the best students regardless of background or geography or anything else, makes complete sense to me.

“There’s a lot of noise about this issue and a lot of pressure from the Office for Students.

“Fitz shouldn’t be frightened of that at all, because it’s what it wants to do and has been doing. Fitzwilliam College is something of a leader in the field. That said, we shouldn’t be complacent, because there’s obviously a long way to go. Cambridge as a whole has to recognise that there’s a lot of pressure to move this issue forward.

“It has got to do it in a sophisticated and a thoughtful way. It would be very easy to tick some boxes and that actually doesn’t really change much.

“We also need to think once those students get to Cambridge ‘are we doing enough to make sure they’re supported?’ Getting to an elite university is just the start. There are other barriers which follow.” 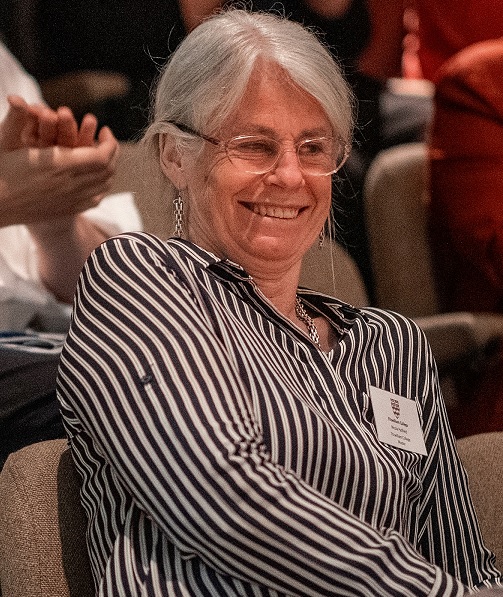 Initially, Sally’s ambitions are about evolution, not revolution, as she paid tribute to Nicky (pictured above) for her six years as Master.

“Clearly, Nicky’s a very hard act to follow,” she adds. “She’s been fantastic in terms of welcoming me and I know she’ll be at the end of the phone as well as just down the road if I need any advice or support. That’s great.

“The brilliant thing about coming to Fitz is it feels to me to be a strong community and a quietly confident community that knows it must keep moving forward.

“My ambition in the first term is really to understand it a lot more. It’s very foolish to come in and say ‘I’m going to do X, Y and Z’ before I’ve really spent some time somewhere new.

“Everything that makes Fitz lovely and successful, we need to cherish, but I think we can also bring the outside world in somewhat by talking up our achievements
– and I think that would be helpful to students.

“Since I was appointed as Master-elect, I’ve had all sorts of people in contact with me with quite varied backgrounds, interest and experience saying ‘we’re keen to get involved in different ways’.

“We’ve got a lot of talent in our alumni network and I want to make sure that I’m building links to strengthen those ties going forward. The community succeeds if we all support each other.” 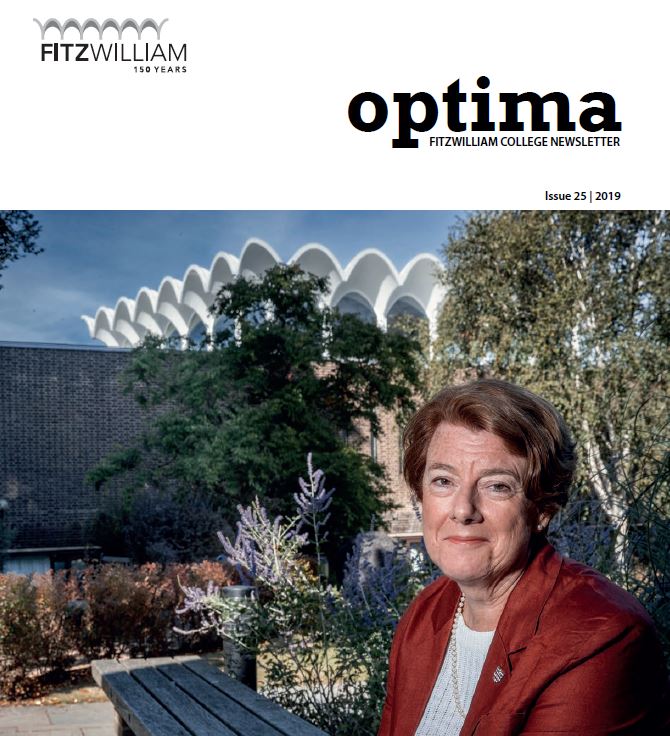 She is the latest member of the Fitzwilliam community with a political connection, believing the College has representatives across the political spectrum for one reason.

“There has obviously been, and remains, a very strong connection with public service,” she says.

“That’s something I think is brilliant. It’s great to have talented people go into public service, both in the UK and internationally.

“I didn’t even know the incredible range of people before. Even in the House of Lords with me, there’s Norman Lamont, Jim Knight, Leslie Griffiths.

“There’s half a dozen in the Commons, in the European Parliament and abroad, too.”

She was a key confidante of Blair before her departure from Downing Street in 2005, and is proud of her record in Government, which included a prominent emphasis on education.

“Of course there’s controversies about the Government of which I was part, but overall I’m very proud of what we did,” she adds.

“We were trying to move the country forwards in a way that we thought increased fairness, but also increased economic success. I stand strongly by that. Whether it was the introduction of the minimum wage, investment in Sure Start, cutting waiting times for operations from 18 months to 18 weeks, increasing development aid, or big cultural and legal change around equality, especially LGBT rights, I know we made a difference.

Sally anticipates testing times ahead, but she is ready to face them with the same passion, energy and honesty which she has shown throughout her life.

She says: “This is going to be a challenging time for higher education, yet it has never been more important to the success and standing of the UK.”

This interview originally appeared in Optima 25, which is now available in College.