Bulk Superconductors: Revolution or Red Herring?
The discovery of the so-called High Temperature Superconductors in 1987, which in bulk forms are able to conduct very high electrical currents and hence generate extremely high magnetic fields at liquid nitrogen temperatures, was heralded as the most significant scientific breakthrough since the discovery of the transistor. This lecture will describe in a substantially non-mathematical way the properties of these remarkable materials, their manufacture and their potential for engineering applications, which include frictionless bearings, energy storage systems, MRI and high field permanent magnets.

The lecture is followed by a drinks reception. 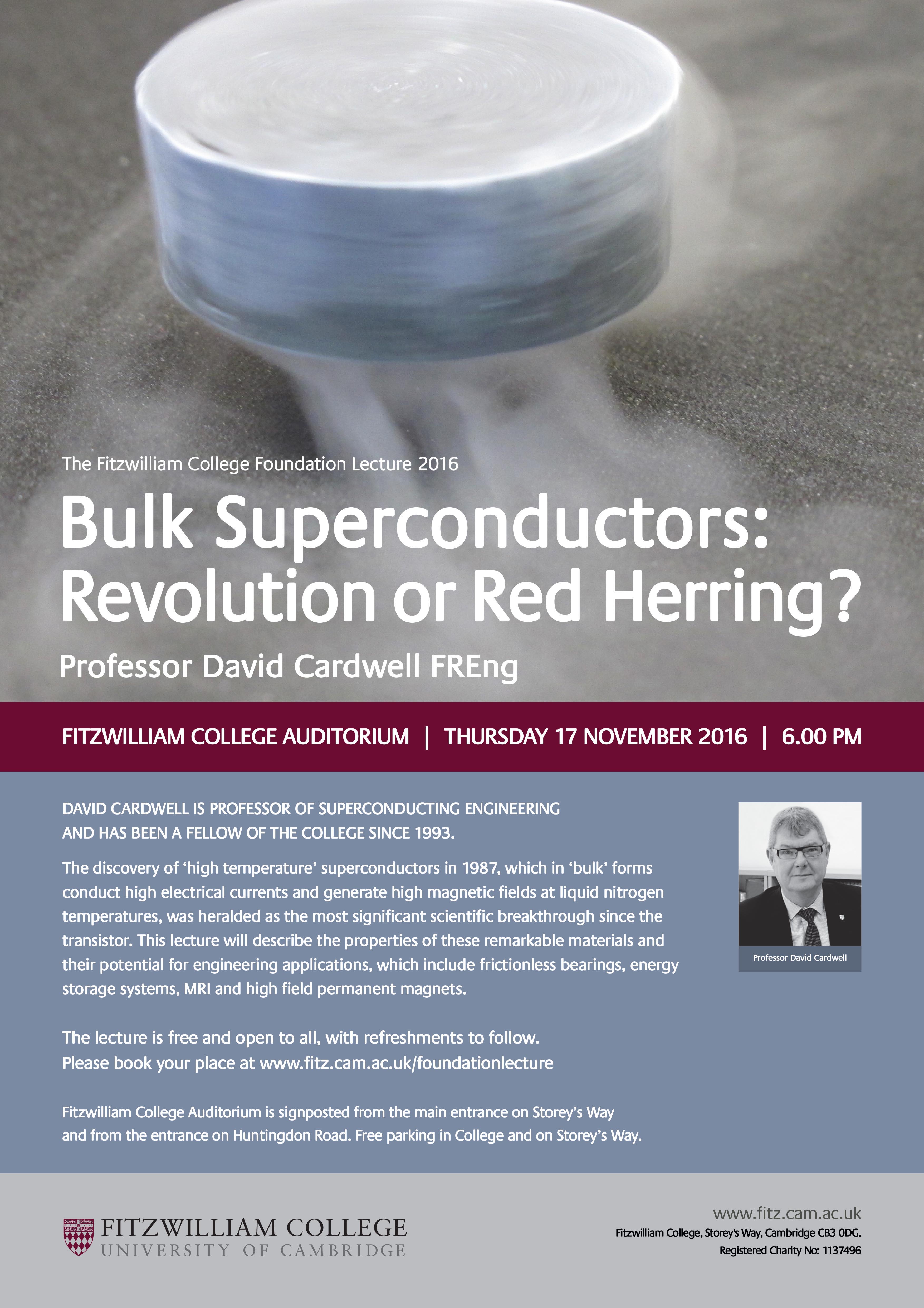 Professor David Cardwell FREng
David Cardwell studied Physics at the University of Warwick between 1980 and 1986, graduating with a BSc in 1983 and a PhD in 1987. He joined Plessey Research (Caswell) on completing his PhD, and prior to moving to Cambridge in 1992. He is currently Professor of Superconducting Engineering in the Department of Engineering, University of Cambridge, where he leads the Bulk Superconductivity Research Group on the processing and applications of bulk high temperature superconductors, which can be used to generate very high magnetic fields, including the world record field of 17.6 T in a bulk superconductor set in 2014.

He was appointed Head of the Cambridge Department of Engineering in October 2014. He was a founder member of the European Society of Applied Superconductivity (ESAS) in 1998 and has served as a Board member and Treasurer of the Society since 2007. He is an active board member of five international journals, including Superconductor Science and Technology, and has authored over 350 technical papers and patents. He has given invited presentations at over 60 international conferences. He was awarded the PASREG prize for excellence in the processing of bulk superconductors in 2001, and collaborates widely around the world with academic institutes and industry.

Professor Cardwell was elected to a Fellowship of the Royal Academy of Engineering in 2012 in recognition of his contribution to the development of superconducting materials for engineering applications. He was awarded a Sc.D. by the University of Cambridge in 2014 and an honorary D.Sc. by the University of Warwick in 2015. Professor Cardwell has been a Fellow of Fitzwilliam College since 1993 and has held various offices during this time, including Admissions Tutor for Sciences (2000-2013), Undergraduate Tutor (1995-2013) and Director of Studies in Engineering (1996-1999).

The Foundation Lecture is the College's major annual public lecture; lecturers are often distinguished alumni, Fellows or former Fellows of the College.