Professors David Coomes and Srinivasan Keshav both work in the area of sustainability, are Fellows of Fitzwilliam College, and - as luck would have it - share an office in The Grove. The story begins when Keshav interviewed at Cambridge in Easter 2019.

“I’m a Professor of Computer Science,” he explains “but I made my mind up that I would only take a job at Cambridge if I could continue and expand my work, which began in 2010, on using computer science to move towards a sustainable future.” Having already worked on reducing the carbon footprint of building energy use; electricity generation, and transportation, in the prior decade he turned to a new sector: Agriculture, Forestry and Other Land Use (AFOLU). “I wanted to explore how computer science can help plant trees at scale. As I began to do my initial research, have those early conversations, everyone said I needed to talk to David… and suddenly I realised that not only was he at Fitz, but I was going to be sharing an office with him.”

‘David’ turned out to be Professor David Coomes, a forest ecologist who runs the University’s Centre for Earth Observation and is the Director of the University of Cambridge Conservation Research Institute. For their first joint project they set to estimating the rate of carbon sequestration (removal) in tropical forests, using pulses of laser light fired from lidar sensors on planes and the International Space Station to create 3D reconstructions of forest canopy structure over huge areas of land. It’s possible to measure carbon sequestration in trees by tracking changes in forest structure over time. If that sounds like a big job, it is: the huge data banks require 1000 computers to analyse them.

“We use similar technology to that employed in autonomous cars to make them aware of their surroundings,” Professor Coomes says. “It’s like echolocation used by bats but using light instead of sound to measure distances. Every second these lidar sensors give you about 1 million pieces of information to analyse afterwards. I have worked with airborne lidar for a decade now and have just about managed to cope with the data volumes involved, but NASA’s new sensor on the space station is providing data dispersed much of the world’s surface, and that requires proper computer science expertise to process efficiently. It has been an enormous pleasure to work with Keshav and a bright postgraduate student on a new project to evaluate changes to the Amazonian rainforests using the new technologies.”

Professor Keshav, too, has been changed by the work. “I started with the mindset of planting trees, but now I see that conservation is much more important. You can plant trees but you won’t get an ecosystem with biodiversity right away and you might destroy existing habitats to make way for them. The reason I started with planting trees is that I knew nothing about forests – but I have since been reading lots of papers and coming up to speed. Certain ideas from computer science transfer over, but there are many new things to worry about in this new context, such as biodiversity, indigenous people, livelihoods.”

The importance of projects like these is hard to overstate. As Coomes explains, “The great challenge we face from a conservation perspective is that green finance is going into plantations. The message for protecting and restoring natural forests is a harder sell to corporations and governments than plantations.”

From a joint project to a new institution

Now, with a £3.75 million donation from a blockchain company called Tezos, the two Fitzwilliam Fellows have teamed up to create the new Cambridge Centre for Carbon Credits (4C), based in the David Attenborough Building under the auspices of the Cambridge Conservation Initiative.

The initiative uses field measurements and earth observation to automatically certify the quality of a conservation project, creating a trusted marketplace for nature-based solutions.

“Currently organisations that seek to sell carbon credits arising from forest protection must pay consultants to fly out to their projects to certify that they are achieving their stated goals,” explains Coomes. “We hope, instead, to combine earth observation with highly targeted field work to analyse the livelihood and biodiversity benefits, for different projects from around the world. Essentially, we will create a new technology-led platform where you can get offsets for your carbon footprint by investing in these projects. We recognize, however, that although the technology is remarkable, projects will still need people on the ground to assess whether income from forest protection is distributed more equitably, and to assess any biodiversity benefits.”

This trusted decentralised marketplace uses a blockchain designed by its funders, Tezos. Tezos requires significantly less energy than better-known blockchains like Bitcoin or Ethereum because it’s not based on mining. Instead, holders of a Tezos token (a ‘tez’) receive a reward for taking part in its proof-of-stake consensus mechanism. If you ‘stake’ your tez coins, you tie up your coins so they can power the network. Moreover, the network has unique mechanisms that allow it to evolve by upgrading itself.

The 4C system is designed to directly fund project owners, greatly reducing monitoring and verification overheads and creating trust in the funding of projects involving nature-based solutions around the world.

“The current approaches are a paradox, in that reducing carbon footprint might require trips halfway around the world. Our question,” Keshav emphasises, “is how much can be done scalably, for example with remote sensing? There will probably continue to be elements of fieldwork: biodiversity and livelihood are the hardest components to assess remotely. Hyperspectral sensing can map forest diversity, but accounting for the impact on animal populations is much harder. 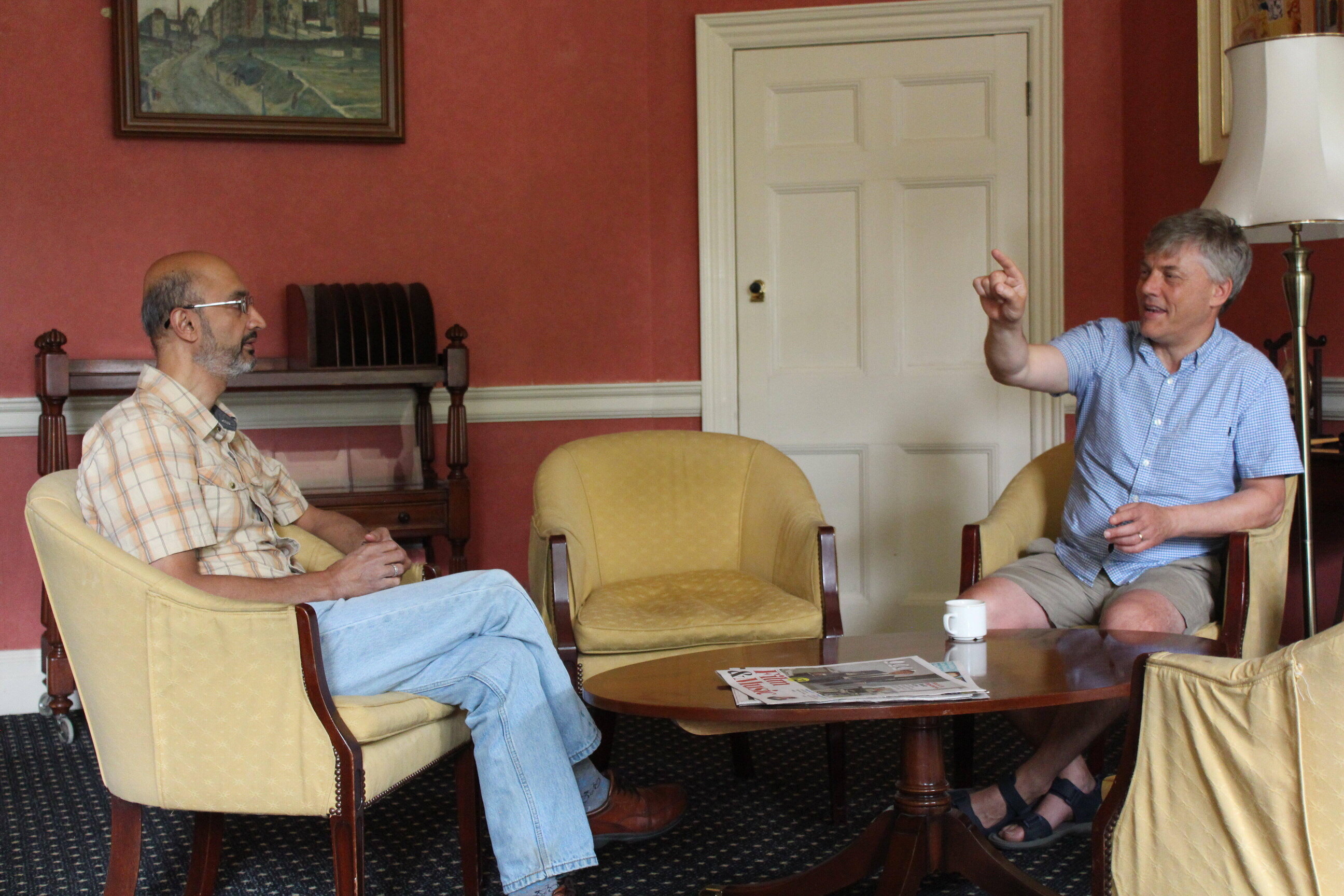 The importance of action

These paradoxes are becoming increasingly acute, and as we approach COP26, both Coomes and Keshav are thinking hard about the changes we must make. They both work closely with the data that measures our impact on the natural world and there is an authority to their request for action. Professor Coomes is a co-author of the recent landmark British Ecological Society report, in which his chapter concentrated on natural solutions to climate change in the UK context. He has also recently contributed to a policy brief for the UK Government on COP26. His advice, however, is far more direct: “There is definitely a place for nature-based solutions in the decades ahead but these solutions are no substitute for rapid decarbonisation. Nature-based solutions use nature to help address the climate crisis, simultaneously helping biodiversity and people, but they shouldn’t ever be used as an excuse to avoid decarbonising the economy. Also, planting trees is not an immediate solution, as is takes years for the plantations to reach their full potential at carbon capture. Protecting and restoring degraded natural systems will have immediate benefits.”

For Keshav, COP26 is the “last great hope”, and a chance for the UK to play a leading role in the future of the planet. His prescription is manifold: “Firstly, we need an organization one might call the “International Court of Climate Justice.” There are no teeth in the current international regime for cutting emissions and this court, like the International Criminal Court, would help. Secondly, we need a carbon border tax regime. If you import goods, there should a carbon tax on point of entry if the item originates from a country with no carbon tax. Every tonne of carbon emitted must have a tax on it that corresponds to its ‘social cost’. Air travel should be discouraged and made rare. In contrast, at the moment airlines pay no tax on their aviation fuel – kerosene.”

He also questions the distribution of government subsidies. A recent analysis by the International Monetary Fund indicated that the fossil fuel industry benefits from subsidies of $11m every minute. “The subsidies for renewables are actually far less than for oil and gas at present,” he adds, “We could subsidise electric cars overnight, and gradually reduce that over time. “There is this growing realisation,” Coomes adds, “that nature is not only intrinsically valuable, but provides huge value to humans both economically and socially, including by storing carbon. If you clear forests, their carbon goes into the atmosphere as CO2 and that contributes to the climate crisis. Keshav chips in, “In terms of damage caused by release CO2 into the atmosphere (the Social Cost of Carbon), some economists have estimated it to be as high as $420per tonne of CO2. And the globe is emitting about 40 billion metric tonnes of carbon dioxide per year.”

Mindful of the funding behind their new centre, both were keen to identify Bitcoin as particularly problematic, since new coins are ‘mined’ using vast amounts of electricity generated by fossil fuels – using about same amount of energy annually as the Netherlands did in 2019 (data from the University of Cambridge and the International Energy Agency).

“The world should ban Bitcoin,” Keshav adds. “It was the first blockchain to come out, so is best known, but it is particularly inefficient.”

When it was banned by China earlier this year, electricity usage in parts of Siberia skyrocketed 160%, as crypto miners, legal and illegal, migrated over the border to Russia.

In spite of these and other challenges, both have hope. “The possibility of behavioural change is greater now than before,” Keshav says. “Twenty years ago, Greta Thunberg wouldn’t have stood a chance. In fact, we had someone similar in Canada– Severn Suzuki. She never had mass impact. I hate to say it, but the Tiktok generation is going to save the Earth. What we’re doing here – scientists, campaigners, journalists, people like Greta Thunberg or David Attenborough – are trying to educate, which leads to public awareness. When the public need for change grows sufficiently in a democratic country, politicians have no option but to pay attention. The film An Inconvenient Truth, for example, has created a generation of people whose eyes were opened to climate change. In China, about four years ago, they totally banned ivory and official banquets stopped serving shark fin soup, something no one expected.

Despite these hopeful signs, the problem is that international policies are not currently sufficient to keep climate change below 1.5 degrees. If we continue on the path we are today, it’s a question whether we get to 2 degrees, or 4. In short, we have the tools we need to avert the worst of climate change and, with the right political will and leadership, we can look forward to a better future.”

One thing is for sure. When it comes to climate and ecological action - from measuring the carbon in forests, to using blockchain marketplaces to generate trustworthy carbon credits, to a multitude of other projects led by their peers - it seems Fitzwilliam scientists like Professors Coomes and Keshav will be at the cutting edge.