Two teams  - the Fitz Fliers and the Fitz Triers - composed of staff and Fellows from Fitzwilliam College, ran in the Chariots of Fire race for the third time on 18 September.

Each person ran a lap of 1.7 miles and training had obviously gone well as the Fitz Fliers came in 33rd out of 380 teams, with a total time of 1hr 5 minutes and 24 seconds, and superb individual times. They were the second-fastest college team.

Andrew Powell, Bursar, said: “It was a brilliant performance and another great day. Congratulations to all - just another 5 minutes to catch King’s and be top college (challenge for next year!)”

Organiser Claire Claydon, Assistant to the Senior Tutor, said: “The team members all have different running experience (some were fairly new to it, some have run marathons or half marathons, and some just run shorter distances) and train in their own way (no formal team training sessions were held). A special shout out to Jack Clarke (bottom left) who ran a lap for both teams! Well done everyone - Billy Pride!”

Fitz Trier Jon Turner, the College's AV technician (top right) enjoyed the experience despite a gap in his training: “I did a 2-mile run 3 times a week from April to July, but nothing between August and September, so I was pleased with the results as I hadn't run for 6 weeks! It was a good experience, and nice to see a friendly face on the back quarter cheering me on – Claire, the master organiser. The hardest part was collecting and handing over the baton in the melee of people!”

The winning team, from the Varsity Hotel, ran the course in 48 minutes 43 seconds.

Fitzwilliam and Chariots of Fire

The 1981 film Chariots of Fire has a strong connection to Fitzwilliam: Iain Reid (History 1978) was asked to help recruit student extras for the film in 1980 while doing vacation work for a London advertising agency. Ivor Beazley (History 1978), Derek Pringle (Land Economy 1978), Ross Scrivener (English 1978), Philip Sparkes (English 1978), Tim Sullivan (Law 1976), Dick Tyler (Law 1978) and Jon Ward (English 1978) all got involved - among others - so eagle-eyed viewers may spot several familiar Fitzwilliam faces in the film. "But some of us didn’t want the required 1920s haircuts," Iain said. "It just wasn’t an era for short back and sides!" Iain is a retired Fellow and former Director of Development. 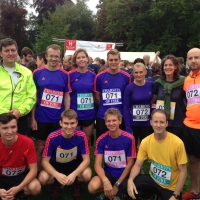