Do ideas change the world? An exploration of whether the history of economics is useful

Dr Cléo Chassonnery-Zaïgouche explores the history of discrimination and wages, economic expertise, and quantification – subjects which are all issues during the present COVID-19 pandemic.

Fitzwilliam College Fellow Cleo will ponder: Do ideas change the world? An exploration of whether the history of economics is useful, when she presents her research in a Q&A session on Thursday 26 November. Register to join the event via Zoom.

“It’s complicated to explain a current crisis by past crises,” Cleo says.

“As a historian, every event is usually studied as singular, even if you have some regularities. For the current crisis, what I think is comparable with other crises is that we don’t know how to frame it yet.

“Usually, a crisis is also defined by a crisis of representation, and a competition to define what’s important. Historians of ideas, or in my case historians of the social sciences, study how intellectuals, experts, academics, produce a knowledge on the world and how this knowledge is used.

“In the current crisis, it is interesting to observe how the tools to make decisions, like how to measure the depth of a crisis, what data to use, how to explain it, and how to compare policies are under scrutiny.”

Inequalities and discrimination – including the intersectionality of race, gender, and class – are key areas of Cleo’s research, which looks at late 19th century Britain, and the United States, from the 1950s to 1980s.

She says: “I’m always a bit obsessed with how some conceptual distinctions, or separations, became central to the way we think. Discrimination is a specific type of inequalities which is very recent. It is recent because there is no discrimination if people are legally unequal.

“The main question behind all my work is: can we change the world with ideas? Is economics useful? What does it change if we can describe something call discrimination and measure it?”

The postdoctoral research associate at CRASSH (the University of Cambridge Centre for Research in the Arts, Social Sciences and Humanities) also works on Expertise under Pressure, alongside another Fitzwilliam Fellow, Professor Michael Kenny.

She says: “Collectively we have this question – is there a crisis of expertise, what does it mean? How could we improve the link between experts and policy makers?

“One example is there is an idea that there is a trade-off between health and the economy (with COVID-19) – should we save lives, or save the economy?

“'The economy' is something that is very abstract, which has been constructed over the years. Imagine you could say it’s not health versus the economy, it’s short-term versus long-term. It’s the effect on some people, versus others.

“Those are the questions we’re facing. How do we represent them? What’s the model? What are the variables we use? What’s the measurement of this trade off? Is it the number of dead people? How do we consider these facts and use them to make decisions?

“Why one way to describe the 'economy' became dominant over other ways is the type of question we are trying to answer. And, in this process, you have politicians, and citizens, the media, intellectuals and academics, and many different people, trying to express their view on what’s going on, and then you have the hard fact of the crisis happening.”

Greater transparency means experts have more accountability now. For example, we know who the experts are in the Government’s Scientific Advisory Group for Emergencies (SAGE) committee. What informs decision making and policy makers, and what is discounted, is also of interest. Crucially, history also helps to determine what has been left behind.

“You also have what is not measured, what doesn’t count, why it is not counted,” Cleo adds.

“This is really important when you do history: what’s been used as an idea, and what has been left out and why? For example, there is a constant in history that unpaid care work, usually done by women, is not counted. In the current crisis, just as in the GDP, this aspect has not been the most prominent to make calculation and measure the impact of policy.”

There is plenty for further discussion. Register to join the event via Zoom. 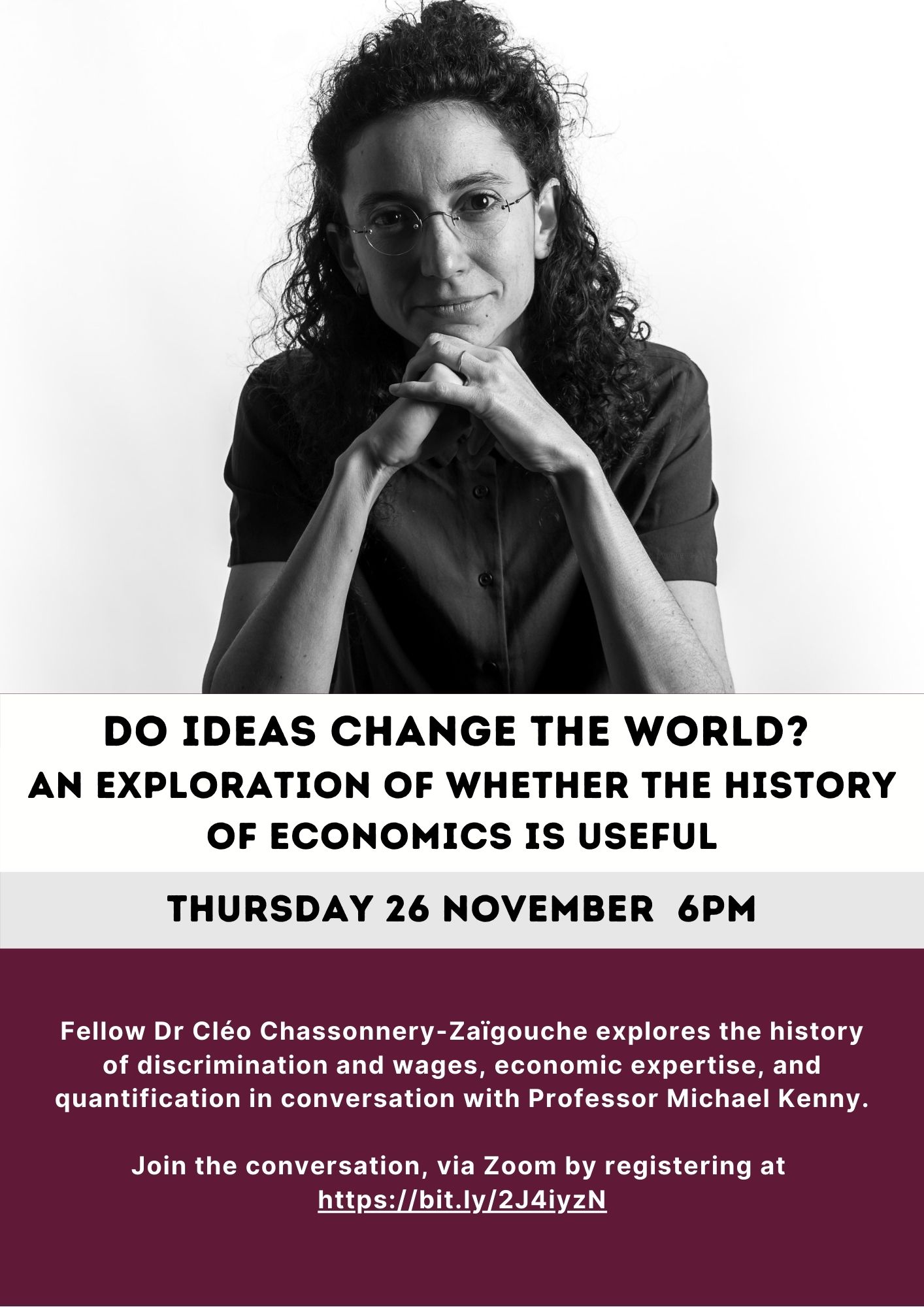 Fellow(s) in this article
Professor Michael Kenny
Other News