Two teams, the Fitz Sisters and the Fitz Mixers, comprising staff and Fellows from Fitzwilliam College, ran in the Chariots of Fire race for the fifth time on 22 September.

Each team was made up of six people and each person ran 1.7 miles (2.73km). This was the first year that an all-female Fitzwilliam College team took part, in celebration of women entering the College as undergraduates in October 1979.

Both Fitz teams raised over £1600 for Addenbrooke’s Charitable Trust (ACT), beating all previous totals. This money will help fund a new specialist children's ambulance service, which will be dedicated to providing the highest level of care for Cambridgeshire’s sickest children, benefiting on average 1,700 patients a year.

Organiser Claire Claydon, Head of Tutorial Office, said: “I was very proud of us all – we all ran as hard as we could and everyone seemed to have a great time!”

The winning team, Secret Squirrel, ran the course in 56 minutes 56 seconds. All the race times are recorded on Stuweb.

There is still time to support our teams and enter your donations via the Just Giving page!

Fitzwilliam and Chariots of Fire

Philip Sparkes says: “A number of us can recall being in this film while we were at Fitz. Due to the political sensitivities of the colleges concerned, many of the Cambridge scenes had to be filmed at Eton!” 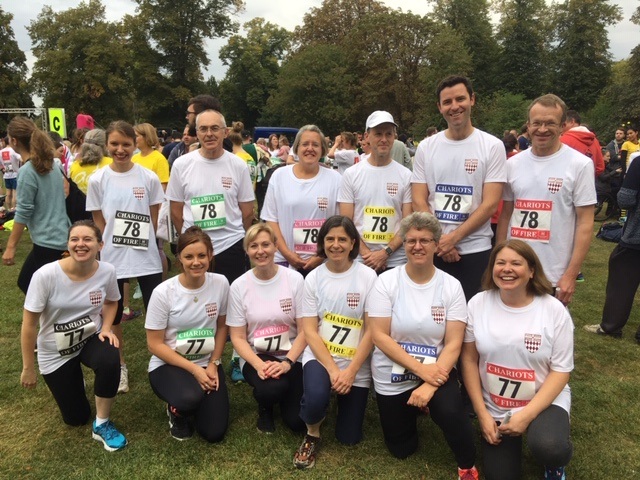