Harnessing the equivalent of three tonnes of force inside a golf ball-sized sample of material that is normally as brittle as fine china, the team beat a record that had stood for more than a decade.  At 17.6 Tesla, roughly 100 times stronger than the field generated by a typical fridge magnet – this beats the previous record by 0.4 Tesla.  The record has now been officially recognised by Guinness World Records.

The record, which was achieved by the University of Cambridge (UK), the National High Magnetic Field Laboratory and the Boeing Company (both USA), was published in Superconductor Science and Technology on 25 June 2014. 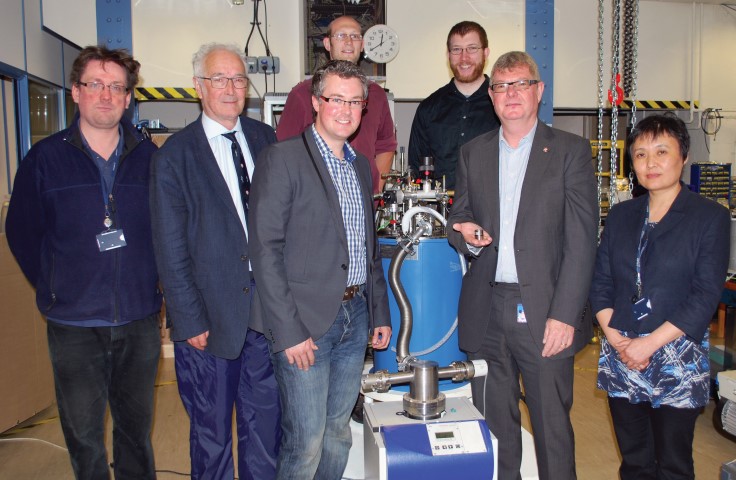 David Cardwell (holding the superconductor) and the team.

"The team used gadolinium boron carbon oxide (GdBCO) which is typically very brittle, then doped the structure with silver, and 'shrink wrapped' steel around the thumb-sized object to increase its strength."

Superconductors which trap strong magnetic fields have a wide variety of applications, from Maglev trains to electricity storage.

A bulk superconductor levitated by a permanent magnet

David is a Fellow of Fitzwilliam College and leads the Bulk Superconductivity Group at the University. Read more here >>

Professor David Cardwell is giving the annual Foundation Lecture at the College on 17 November at 6pm, entitled 'Bulk superconductors: revolution or red herring?'

The lecture is free and open to the public, but booking is essential. 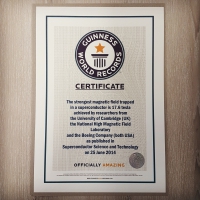 Fellow(s) in this article
Professor David Cardwell
Other News