Honorary Fellow appointed to the Court of Appeal

The College welcomes with great pleasure the appointment of Fitzwilliam Honorary Fellow and alumna Dame Sarah Asplin DBE QC (Law 1979) to the Court of Appeal.

The appointment of Lord and Lady Justices of the Court of Appeal are made by Her Majesty The Queen on the advice of the Prime Minister and the Lord Chancellor following the recommendation of an independent selection panel.

The Hon Mrs Justice (Sarah) Asplin grew up in Southampton where she attended the local comprehensive school and Southampton College for Girls before going on to study Law at Fitzwilliam College, Cambridge in 1979. She was called to the Bar in 1984 and specialised in pensions law, professional negligence and trusts disputes.

She has been involved in many high profile pensions cases, including PNPF v Taylor & Ors which was about the huge deficit in the industry wide pension scheme for ships’ pilots and a derivatives case (Property Alliance Group V Royal Bank of Scotland) which was concerned with alleged rigging of the LIBOR rate in London.

Mrs Justice Asplin’s appointment will fill a forthcoming vacancy in the Court of Appeal arising from autumn 2017.

Reflecting on the appointment, The Master, Nicola Padfield, Reader in Criminal and Penal Justice at the Law Faculty, said: "A proud moment for Fitz - and a fantastic role model for our students."

Find out more about the appointments >> 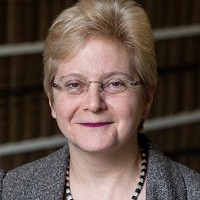