The College is saddened at the death of alumnus Mr Lee Kuan Yew, former Prime Minister of Singapore. The Master has conveyed her respects to Fitzwilliam alumni in Singapore and to Singaporean students currently studying at the College, and the College flag is flying at half-mast today.

Lee Kuan Yew, who died on 23 March 2015, was the most significant statesman to be a member of Fitzwilliam College.  He was Prime Minister of Singapore for the first three decades of its independence, and led its transformation to a flourishing first-world nation.

Lee Kuan Yew was born in 1923 and was educated at Raffles Institution, where in 1940 he came first amongst all pupils in Singapore and Malaya and won a scholarship to Raffles College.  His university education was ended by the Japanese invasion in 1941; he was at considerable personal risk, as many young Chinese men were massacred.

After the war, Lee determined to go to England and read Law.  At the London School of Economics, he was overwhelmed by living in London and sought a more congenial environment in Cambridge.  One of his fellow Raffles College students introduced him to W S Thatcher, the Censor of Fitzwilliam House, who admitted him for the 1947 Lent term.  This proved to be an inspired decision: despite all the disruption to his education, Lee’s high ability and determination ensured that he graduated First Class in both parts of the Tripos; his Starred First for Part II Law in 1949 placed him at the very top of his cohort, above two contemporaries who became Professors of Law in Cambridge, and gained for him Fitzwilliam's Whitlock Prize.  He was called to the Bar at the Middle Temple in 1950.

Politics was central to his life. Back in Singapore, as a barrister he represented many cases of actual or alleged rebellious behaviour against the colonial government.  The Malayan Communist Party was fomenting trouble, but Lee established the non-Communist People’s Action Party in 1954 and became the first Prime Minister in 1959, when Britain ceded all internal responsibilities to Singapore.

At that time, Lee Kuan Yew favoured a merger between Singapore and Malaya, and in 1963 the fully-independent Federation of Malaysia was formed, incorporating Singapore, peninsular Malaya, and Sabah and Sarawak in Borneo.  This lasted only until 1965, when Singapore left the Federation and became independent; that the union was unviable was a matter of great regret to him.

Under Lee’s leadership as Prime Minister, and with the determination and hard work of its people, Singapore was transformed from a territory with few resources into a nation which now has GDP/head over 50% greater than that of the UK.  Lee Kuan Yew retired in 1990, but for several years exerted influence under the title of Minister Mentor.  Whilst many in the West were critical of some of his policies, for example on criminal justice and restrictions on freedom of speech, Lee justified these by arguing that in developing a nation so fast, some freedoms had to be sacrificed.

Lee Kuan Yew was elected to an Honorary Fellowship of Fitzwilliam in 1969, and for many years was the most senior of the College’s Honorary Fellows.  Two years later, he gave the Foundation Lecture: East and West – the twain have met.

The connection between Fitzwilliam College and Singapore has continued to be strong over several generations.  A substantial and significant body of Singaporean leaders in the professions and the nation have studied at Fitzwilliam, including Lee’s younger brothers who read Law and Medicine.  Currently, there are 16 Singaporean undergraduates and 12 graduate students in the College. 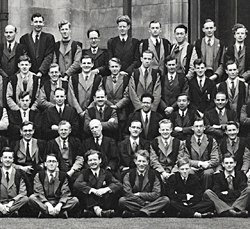 (Back row, third from right) Harry Lee, as he was known by his Anglophone family and during his time in Cambridge.  The senior members of Fitzwilliam in the matriculation photograph include N J G Pounds, W W Williams and W S Thatcher

Lee Kuan Yew at his graduation in 1949, with his wife Kwa Geok Choo (Girton, 1947 – who also had achieved a First in Part II Law) and the Censor, W S Thatcher 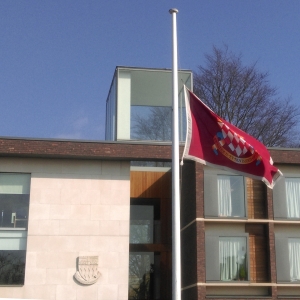 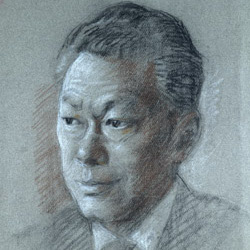