The College announces with great sadness the death of Professor Alan Cuthbert, Master 1991-1999 on Saturday 27 August, aged 84, and extends its condolences to his wife, Hetty, and family.

A full obituary will be in the Fitzwilliam Journal to be published later in the year.

His biography on the Royal Society website explains the significance of his work:

“Alan Cuthbert made significant contributions to our knowledge of the physiology and pharmacology of sodium transport in secretory epithelia. Alan’s early research mainly concerned the electrical and mechanical properties of various types of smooth muscle. This led him to an examination of the electrical behaviour of secretory epithelia, and of the action of drugs on ion transport mechanisms. He introduced and refined the technique for measuring the number of sodium transport sites with the aid of radioactively labelled amiloride and derivatives such as benzamil, and has made important studies on the mechanism of binding blocking agents and on the control of sodium transport. Later, Alan turned his attention to chloride channels in epithelia, with many studies related to cystic fibrosis.”

Alan Cuthbert talking about his work>>

There will be a Memorial Service to celebrate Alan Cuthbert's life in the Chapel of Jesus College at 2:00 pm on Saturday 5 November, to which all are welcome. 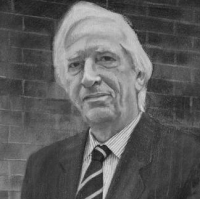