Alumnus Professor M S Swaminathan FRS (PhD Botany 1950) was elected into an Honorary Fellowship at a meeting of the Governing Body on 15 October 2014.

A plant geneticist by training, Professor Swaminathan is widely celebrated for his leadership of India’s Green Revolution – a programme under which high-yield varieties of wheat and rice seedlings were planted in the fields of poor farmers – and for his tenure as Director General of the Indian Council of Agricultural Research (1972-1979). Founder, Emeritus Chairman and Chief Mentor at the M S Swaminathan Research Foundation
in Chennai, India, his advocacy of sustainable agriculture leading to an ‘ever-green revolution’ makes him an acknowledged world leader in the field of food security.

Professor Swaminathan said of his appointment: “This is a great honour which I accept with much humility.”

Prof Swaminathan and his wife were guests at a dinner in College after he had delivered the keynote lecture, entitled ‘The Transformational Role of Plants in Meeting the Zero Hunger Challenge’, at the Cambridge Festival of Plants on 17 May. This event was co-hosted by Fitzwilliam Fellow Dr Bhaskar Vira, the founding director of the University of Cambridge Conservation Research Institute. 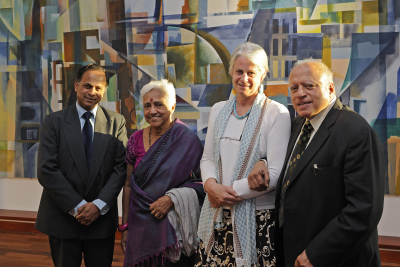 From left: Dr Bhaskar Vira, Mrs Swaminathan, the Master and Professor M S Swaminathan at the 17 May dinner at Fitzwilliam.

Professor Swaminathan began his lecture with a slide from the book Fitzwilliam: The First 150 Years of a Cambridge College, showing Fitzwilliam House, remarking: “My scientific career was launched in this building!” 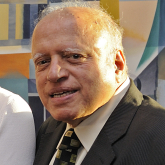