Begun in 2014, this year’s run was the 4th edition of this friendly 5k College race, run on the traffic-free footpath from Wilberforce Road to Coton.

The weather cooperated and we ran in sunshine and cool weather – perfect for running. Alas, the turnout was lower than in previous years (perhaps we can blame Guido Fawkes) but that allowed some older participants to place higher then they expected!

Thanks to satnav apps, the kilometre marks were accurately placed this time and the course was not a centimeter over 5 km.

The overall winner in 21:02 was postgrad Tom McCarty from New Zealand who fought off a determined challenge from Dr David Cole to win by just a few seconds.

First female was a remarkable run by Juniper Wingate – daughter of Fellow Dr Matthew Wingate – who at 10 years of age left the other runners trailing in the dust.

No staircase managed to achieve a 50% turnout, so nobody won the challenge (K staircase was one runner short). 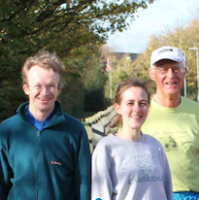