Fitzwilliam College is inviting young women musicians aged 12 to 15, from state schools,  to a free, pioneering conducting workshop on Sunday May 28. The workshop is offered in collaboration with the Royal Philharmonic Society’s (RPS) Women Conductors Programme.

In the last 20 years, there have been only 3 female principal conductors of British orchestras, and this Fitzwilliam College workshop aims to start remedying that by offering the opportunity to young women.

Book your place now for this free workshop!

Open only to state school pupils aged 12-15, the 1-day workshop is aimed at giving young female musicians an introduction to orchestral conducting through hands-on coaching and experience. It will be facilitated by Alma Sheehan, a professional stagecraft coach who works with the RPS Women Conductors Programme, and Katharine Parton, Director of Music at Fitzwilliam College.

The morning session will consist of stagecraft and conducting technique with piano; the afternoon session involves podium time with a professionally-led string ensemble.

Katharine Parton said: “Becoming a conductor is hugely challenging for any musician – and even more so for women, who still make up only a fraction of professional conductors. Experience is often a key barrier for young women, and this workshop will ensure that participants have exposure to orchestral conducting and develop both confidence and practical skills. I’ve heard women as young as 16 say “but I never have”, and therefore that they cannot conduct. By targeting younger musicians – ages 12 to 15 – this workshop hopes to change that before it happens.”

A talk by James Murphy called The Diversity Challenge: the conductor given at the Association of British Orchestras Conference in January highlights the problem.

There is no cost to participants. The College’s Admissions office is funding the workshop, the first of its kind for this age group. The initiative fits with the College’s charitable aims in relation to supporting widening participation at university, as well as actively promoting its own musical expertise.

Dr Sara Owen, Fitzwilliam College Admissions Tutor said: “This is a wonderful opportunity for state school girls who may never have considered conducting before to come and give it a go. The workshop is designed to contribute to the musical development of the participants but will also help them to develop confidence and leadership skills. Fitzwilliam's Director of Music is very dedicated to widening participation in music at all levels, and we hope that this initiative will help achieve that aim."

• Grade 5 or equivalent in any instrument (including theory); no conducting experience required

• Places offered in order of application

The Royal Philharmonic Society’s Women Conductors Programme was founded by Artistic Director Alice Farnham, and Andrea Brown, former Director of Music at Morley College.  The key objectives are to enable musicians of the future and to encourage and support women to be conductors of classical music. The RPS workshops are open to women of 16 and over. 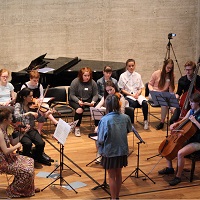 Fellow(s) in this article
Dr Sara Owen
Other News